Sophia is a French medical student who was in Mae Sot working with an organization that organizes medic training for Karen people. 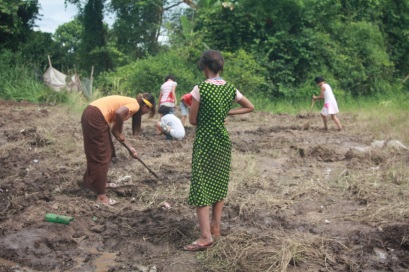 I was initially in Mae Sot with a charity working at the clinic doing medic training (I am medical student in France) and one evening I met Fred at the Canadian restaurant in town. He offered to show me his work, so the next day after I had finished teaching he picked me up. He had just gone to rescue a small group of people from immigration detention, and we were off to pick up a group of kids from the CDC school and then go to the dump.

This was a bit strange for me as I had never seen anything like this place before. I think I couldn’t really speak much the first time.  But at the same time it was great to see how happy all the kids were when we arrived. the kids ran to hop on the back of the truck, and all the adults came up to say hello and sometimes ask for things.

We then went round the dump to drop the kids home, sell batteries and head lamps and check that people were all well. At the end of the evening a family asked Fred if we could go collect their daughter from a boarding school in town. When we arrived at the school there was a discussion between the school head and the parents, but we couldn’t understand why and they didn’t seem to be in agreement. Finally the head mistress explained and the parents agreed to the number of days the child had to go home for as a punishment for getting into a fight.

So this first afternoon/evening was the beginning of an experience, but far too short for me to understand everything that Fred does, and all the aspects of doing community work. He very kindly offered me to spend more days with him the following week, and as I wasn’t teaching anymore I thought this would be a great occasion. So I extended my stay in Mae Sot by a week!

During the week I met up with Fred every morning after he had taken the kids to school to have breakfast. Our days were always full of different things to do, and generally not sticking to the initial plan. In the mornings I used to help Fred read and reply to quite a few emails, and We then had various things to do, such as shopping for batteries/medicine/head lamps/food, etc.

That week a student wanted to drop out of school and there was red eye all around, so a few kids were taking a couple of days out of school, so we spent a lot of time the kids :)

Overall the week with Fred was an amazing experience.

After coming home I have had time to think about his work and community work world wide. I think what Fred is able to provide day to day to the refugees is really important. I could see  that Fred could get a lot of things done so easily and fast. I also asked Fred about his long term solution for the people there, as for the moment it seemed to be a lot of day-to-day work.  He said he is working to train the next generation so they would be able to take care of the community in the way he does in the future.

I hope that Fred is well and that things are going well in Thailand at the moment.

This entry was posted in Uncategorized. Bookmark the permalink.